Informed-Sport and Informed-Choice are rigorous risk-minimisation programmes that promote ‘clean’ sport by providing a solution to the issue of inadvertent doping through the use of contaminated sports nutrition.

Contamination of supplements with substances prohibited by the World Anti-Doping Agency (WADA) is an ongoing problem for sport and athletes across the world, and has resulted in the growing demand for the programmes from supplements brands and the sports community.

LGC has been working with Australian sport and anti-doping authorities, as well as several leading brands, in the last few months in bid to find the best solution for inadvertent doping.

“As an elite athlete you have to be extremely careful about taking sports supplements because there is a genuine risk of contamination – that has been known for some time,” said Louise Burke, Head of Discipline, Sports Nutrition at AIS.

Seven athletes at this year’s Winter Olympics in Sochi, Russia blamed supplement products after they were found to have committed an anti-doping violation.

The AIS’s facilitation of third-party auditing will include “supporting LGC to set up programmes such as Informed-Sport and Informed-Choice in the Australian sporting environment” and “identifying the products that are high priority for auditing and communicating support for brands/products that have been appropriately audited.”

A number of surveys conducted on brands in the USA, United Kingdom, Europe and other parts of the world in the last decade have shown that more than 10% of untested products are contaminated with some form of steroid or stimulant.

This year LGC will be conducting a survey of sports nutrition products available in Australia to ascertain whether contamination reflects levels found elsewhere in the world.

LGC Business Sector Manager Terence O’Rorke is confident the programmes provide the best solution to an issue which has also resulted in the likes of Australian sprinters Matt Davies and Patrick Fakiye being sanctioned for doping.

“Informed-Sport and Informed-Choice have been gathering pace in the UK, USA, Europe and South Africa for the last five or six years, so it is a natural progression that they are now gaining strong interest in Australia,” explained O’Rorke, who previously worked at WADA. “It’s all about gaining the trust of athletes and the general consumer.

“Surveys have shown that it makes no difference where products are made - even the most reputable brands do not have the detection capabilities to identify contamination without the support of anti-doping labs such as LGC and the Informed-Sport programme.”

The issue of contamination - combined with growing consumer demand for reassurance that products do not contain banned substances - has seen a significant rise in the need for Informed-Sport and Informed-Choice. The programmes are accredited to the ISO 17025 standard and screen products for a wide range of substances prohibited by WADA.

An increasing number of sports bodies now recommend that if an athlete wishes to use a supplement, then they should make sure it is registered on Informed-Sport. This is the position adopted by the likes of the English FA and English RFU.

LGC has worked closely with the sports nutrition industry over the last decade to support its efforts at quality assurance and to provide the consumer with products they can trust. Currently, there are more than 450 products registered on the programmes.

Added O’Rorke, “The reality is that athletes at all levels take supplements - from professional footballers to those who see sport as recreational. That is fact. What they need are products that they know are clean and do not contain prohibited substances - this matters as much for recreational athletes as it does for the elite.

“There is no point ignoring the use of supplements, or trying to stop it, and this is why we are seeing more and more anti-doping authorities and sports bodies choosing rather to educate their stakeholders on how to manage the risks.

“The sports nutrition industry is trying to deal with the issue of contamination and we have been greatly encouraged by the initial interest from Australia. Informed-Sport and Informed-Choice are rigorous, risk management programmes that provide the best solution for the risk of contamination.” 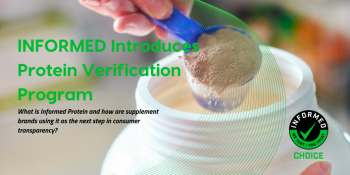 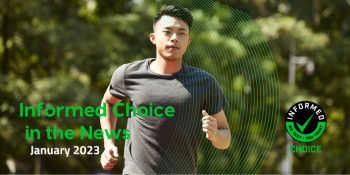 Informed Choice - In the News January 2023 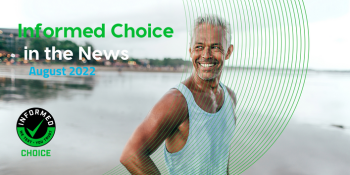 Informed Choice in the News - August 2022